Big thanks to Glau who’s the Digital Manager for UK in Brazil (Facebook and Twitter) because on Tuesday she arranged for me to visit both the British Embassy and the Estádio Nacional Mané Garrincha!

Wow, two incredible places. I’ve got no photos of the Embassy cos security’s unsurprisingly tight there so I even had to leave my mobile phone in a small locker on the way in, but believe me it’s a very impressive complex, including beautiful reception rooms and gardens for royal and other VIP visitors, such as London 2012 opening ceremony flag bearer Marina Silva who stopped to say hello as she passed by.

The stadium is my 6th out of 12 World Cup venues so in that sense I’m halfway, but I’ve still got 5,000km left to #SambaCycle so a very long way to go! However, I doubt any of the remaining stadia will be quite as spectacular as this one, standing like a Roman coliseum on the higher section of Brasilia’s Monumental Axis, it’s very striking from the outside with its tall pillars. And inside it’s also really impressive with the 70k red seats positioned close to the pitch beneath the high circular roof.

My average photos are below, but please look at Glau’s excellent pics on Flickr, for example here’s me taking a selfie: 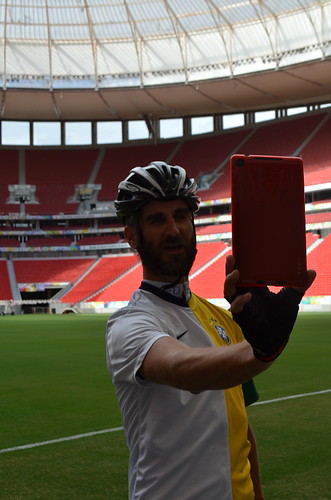 #SambaCycle em Brasília, a photo by UK in Brazil on Flickr.

Look at the roof…

I then cycled further up the hill to see the JK Statue (no nothing to do with the singer from Jamiroquai or the author of Harry Potter, he was President of Brazil and the founder of Brasilia), and then down again and through the Cultural Complex before heading back to Luciano’s apartment.

Posted under My Posts
Comments (2)

This site uses Akismet to reduce spam. Learn how your comment data is processed.